The surgically and logistically complex procedure took two days. It was the largest conducted in the CPMC Transplant Center’s 44-year existence.

The transplant “chain” began thanks to the giving spirit of Zully Broussard, an altruistic organ donor from the Sacramento area. She simply wanted to help and did not have a specific recipient in mind. Her generosity triggered the rare kidney swap, which matched six donors and six recipients. The swap allowed friends and family members, who couldn’t donate to their loved ones, to donate to strangers. In turn, the strangers’ loved ones donated back to the original loved ones—forming the ultimate circle of generosity.

I lost a son to cancer and lost my husband not long ago. So, I know what it feels like to want an extra day and not be able to have it,” Zully Broussard, altruistic donor. 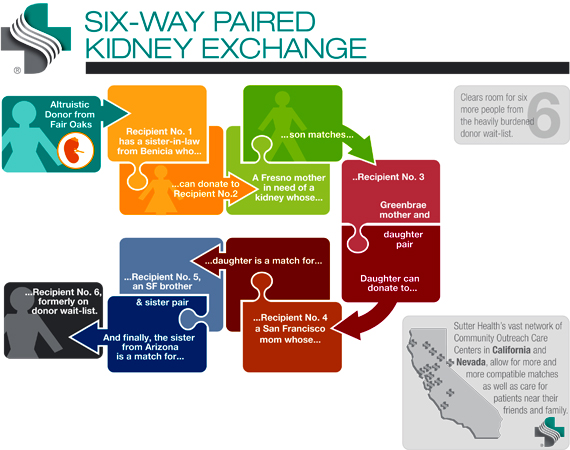 Sutter's vast network of Community Outreach Care Centers in California and Nevada allow for more and more compatible matches as well as care for patients near their friends and family.

“I lost a son to cancer and lost my husband not long ago. So, I know what it feels like to want an extra day and not be able to have it,” says Zully Broussard, altruistic donor.

MatchGrid, donation kidney matching software developed by Biologic, enabled multiple incompatible pairs of donors and recipients to find matches. MatchGrid uses a sophisticated algorithmic program. BiologicTx Chief Technology Officer David Jacobs created the software after he underwent a kidney transplant at CPMC in 2003. At that time, he saw that many potential donors were unable to donate since they did not match friends or loved ones.

Zully chose Sutter Health’s CPMC to keep her safe during the process, saying that “I’m in good hands with this medical team that I trust entirely.” CPMC conducts 200-plus kidney transplants per year, making it one of the largest kidney transplant centers in the western United States. In 2014, the Scientific Registry of Transplant Recipients honored CPMC as the nation’s only hospital with both kidney and liver transplant programs that have higher-than-expected adult patient survival rates; 98.4 percent of kidney patients who received their care from CPMC survived one year after transplant, compared to the expected 96.6 percent.

According to the National Kidney Foundation, more than 100,000 people in the United States are waiting for a kidney transplant and about 4,700 people die every year waiting for a transplant.

Connecting you to vital health news in the Sutter Health network.