Prep yourself so you’re not sniffling on the sidelines all spring and summer.

Do you greet spring with renewed energy and excitement or with a restocked arsenal of antihistamines and tissues? Does summertime entail a full slate of outdoor activities or mean you’ll be standing on the sidelines with itchy eyes and a runny nose?

If you’re like millions of Americans who suffer from seasonal allergies, while other folks are out hiking, biking and barbequing with nary a sniffle, you’re stuck feeling downright miserable. But the more you know about seasonal allergies and how to manage them, the better your odds of making it through the warmer months more comfortably.

To get ahead of seasonal allergies, it would be handy if the same allergens sprung up everywhere and at the exact same times every year. That way, anyone allergic to oak pollen would know not jog along oak-lined trails during March; those who react to ragweed could simply shut their windows midsummer. But that’s not how it works. Common allergens vary by geographical region, and they peak at different times, depending on climate, elevation, latitude and other factors.

For example, according to the American College of Allergy, Asthma and Immunology, many Midwesterners and East Coast residents really struggle with ragweed when it rages late summer. Meanwhile, people in drier, warmer climates may be having more problems with tree pollens. 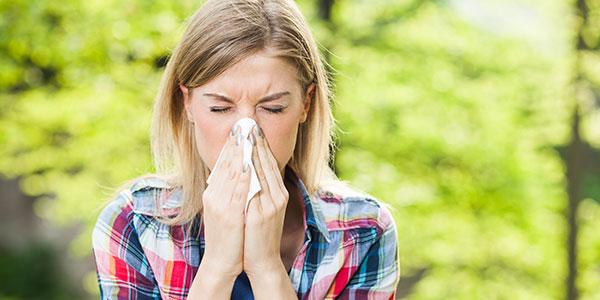 “In Northern California, all types of grasses and most wind-pollinated, nonflowering trees cause the most allergies during spring and summer,” says Ronald Brown, M.D, a board-certified allergy and immunology specialist who practices in Davis. He says March through June tend to be the heaviest hitting months in the Bay Area, whereas peak allergy season may come a bit earlier or later in other areas of the country.

But even those timelines aren’t set in stone. They’re based on when the seasons typically turn and when plants begin to bloom, and each year is different. If the weather warms unusually early, or there’s a lot more or less rain than usual one spring, it can shift peak allergy season backward or forward a bit—and make some years much worse than others. According to Dr. Brown, if spring brings buckets of rain that greens everything up and produces plenty of pollen, and then that’s followed by dry, breezy conditions that help pollen travel, you can expect that allergy season to be harsher than normal.

Regardless of the timing or severity of allergy season, it’s best to have coping strategies in place so you’re ready when your specific triggers rear their ugly heads. First, monitor pollen and mold counts online or in your local newspaper so you’ll know when it’s smart to stay indoors and keep your home and car windows closed. Dr. Brown says pollen counts are typically higher in the mornings and then sometimes taper off. Open fields are heavy pollen zones as well, he adds, so avoid expansive spaces, especially on high-pollen-count days.

After you’ve been outdoors, scrub up. “Wash your face frequently throughout the day, and take a shower when you come back inside,” Dr. Brown says. “Wash clothes you’ve worn outside immediately, because pollen sticks everywhere.”

When Avoidance Doesn't Cut It

If your allergy symptoms are so severe that you’re reluctant to leave your house, “that means you have to do something more to treat your symptoms,” Dr. Brown says. He suggests an over-the-counter antihistamine and non-prescription eye drops. If antihistamines don’t sufficiently control your nasal symptoms, consider a non-prescription nasal steroid spray. If one of those doesn’t work? Then ask your doctor about other medical options or whether you should see an allergist.

“Allergies run the gamut from being mildly annoying to debilitating,” Dr. Brown says. “If symptoms significantly impact your quality of life and medicines are either ineffective or not tolerated, regular allergy shots can be very helpful. They are the only way to treat the cause of allergy rather than just the symptoms. Immunization can permanently decrease the immune system’s reaction to allergens.”

Although shots are usually a last resort, Dr. Brown says they’re quite effective. “My job is to make people feel better so that they can do what they want, from enjoying outdoor activities during high-pollen season to owning a pet they’re allergic to,” he says.