Walk Your Way to Better Health

Learn how you can get active by simply walking more.

If you think exercise always means intense cardio workouts, such as running or busting a sweat at Zumba, here’s a surprising fact: Walking — one of the simplest and most overlooked exercises — may matter the most to your overall health.

The Dangers of Sitting

“Back when physical activity was a natural part of work duties and other daily habits, most people took enough steps each day to preempt the damaging effects of too much sitting,” says Ronesh Sinha, M.D., an internal medicine doctor at the Palo Alto Medical Foundation. Today, many jobs involve sitting at a desk and going everywhere in cars and buses. This sedentary lifestyle significantly worsens health.

Negative effects include packing on excess pounds, which in turn triggers inflammation — now considered the root cause of premature aging and chronic conditions like heart disease, cancer and Alzheimer’s disease.

If you’re like many Americans, you may have a desk job, which means you may not get enough non-exercise physical activity each day for good health. That’s one reason federal guidelines now advocate four to five hours of moderate intensity exercise sessions a week.

But according to Dr. Sinha, everyday activities like walking, climbing stairs, squatting down to pull weeds and bending over to pick up objects directly influence your health. “It’s tragic that we now have to create a separate term for this — non-exercise physical activity, or NEPA — and make a deliberate attempt to restore these movements into our daily, unnaturally sedentary lifestyles,” he says.

If you look at countries where people live the longest, you won’t see classes filled with intense daily cardio, cycling or CrossFit participants. “They simply walk, stand, bend and squat more throughout the day, and they do much of it outdoors,” Dr. Sinha says.

As Dr. Sinha points out, several studies show that walking in particular: 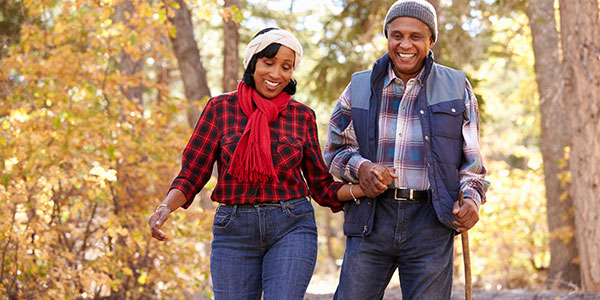 Here’s some things to keep in mind before you go out on your walk:

Once you are doing a reasonable level of walking and moving more throughout each day, add in a few cardio workouts and weight-training sessions. “But do not use these as a replacement” Dr. Sinha says. “A compilation of 18 studies including nearly 800,000 people showed that prolonged sitting throughout the day doubled the risk of diabetes, heart disease and death — despite moderate-to-vigorous exercise.”

You can quantify activity through daily steps using a pedometer or activity tracking device. “The bare bones daily minimum is 5,000 steps a day,” says Dr. Sinha, “the optimal goal is at least 8,000 to 10,000 daily steps. I encourage you to know your number — a 20-minute walk at lunch is better than nothing.”

Everyone can benefit from NEPA — even endurance athletes. “If you are an avid distance runner or triathlete and want to live longer, it may be wise to switch your running shoes for walking shoes every now and then,” Dr. Sinha says. “Don’t get me wrong: Achieving your endurance goals in your favorite sport is a great accomplishment. But keep in mind that the real accomplishment for most of us is longevity, disease prevention and optimal brain and body health. For these goals, regular non-exercise activity is absolutely essential.”

Ready to walk your way to better health?

Talk to your primary care provider about how you can gradually start walking more every day.