At first it starts with a cold and a mild cough that doesn’t go away. Then it gets worse – especially at night – and you find your child gasping for breath when he coughs.

Is it a Cold or is it Whooping Cough?

Cara Barone, M.D., a pediatrician with the Palo Alto Medical Foundation, (PAMF) sees many parents struggle with this question. “Whooping cough, also called pertussis, is a constant concern for parents,” she says.

Parents have good reason for concern: Colds and pertussis begin with similar symptoms, so it’s hard to tell the difference at first. But whooping cough is a highly contagious disease that gets worse after a few weeks, while common colds improve. People develop uncontrollable coughing fits that make it hard to breathe. In rare cases, especially in young babies, it can be fatal. 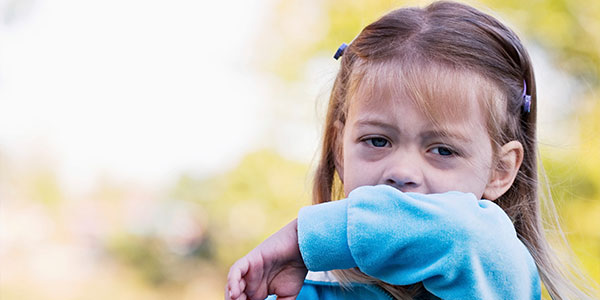 The disease is caused by the bacterium Bordetella pertussis, and tends to run in three- to four-year cycles. Charles Weiss, M.D., MPH, an urgent care specialist and the chair of the Infectious Disease Committee at PAMF, has tracked pertussis outbreaks closely. In 2013, there were 1,904 cases of whooping cough reported in California, he says. That is nearly twice the number as in 2012. Then, in 2014, the number of cases increased five-fold with 9,935 cases of pertussis reported to the California Department of Public Health between January 1 and November 26, 2014.

Drs. Barone and Weiss say there are two key ways parents can protect their families.

The whooping cough vaccine, DTaP, came out in 1997, and causes fewer side effects – notably, less fever – than the older version (DTP), Dr. Barone says. The vaccine is the best protection out there for your family. However, its immune protection doesn’t last as long as the older version.

“It is a terrible, terrible cough, and a miserable sickness,” Dr. Barone says. “If your child is coughing in spasms, or breathing fast, or you can see your child’s ribs outlined when she breathes, your child definitely needs to be seen by a doctor.”

“We are very tuned into the problem of pertussis and we have a low threshold for testing,” Dr. Weiss says. “If it’s pertussis, we’ll likely find it.” Pertussis can be diagnosed with a simple test in your doctor’s office.

“Most people who’ve vaccinated their children know they’ve done their best,” Dr. Barone says. Still, it’s possible for a vaccinated child to get the disease. “Be reassured that if your children do get whooping cough, they probably won’t get as sick as they would have otherwise.”